Okay, I know I’m going to shoot myself in the foot. I caved and got a beer subscription. The email advertising this new subscription from BrewDog, called “Fanzine”, came through and I toyed with the idea. By “toyed” I mean, I tried to convince myself NOT to subscribe. Beer subscriptions can be a ‘hit or a miss’ for 3 reasons:

All cans are 330mls and the first set of Fanzine beers are as follows:

So the first beer was about to be cracked open. BrewDog’s can design have been revamped recently, with a deep, speckled, almost tungsten look on these aluminium cans of joy. In addition to this, BrewDog have made the entire packaging plastic free – a great environmentally-friendly bonus. With ‘citrus tart’ being promoted on the bright yellow can, the first thing that comes to mind is lemon! On pouring, a bright golden lager-light beer was dispensed from the chilled can. A large, bright white foam head was produced, though this quickly dissipated once it got to the lounge table. Lemon scents arose from the glass and this was certainly the first thing I tasted. It was really tart for a pale ale! The beers starts with a lemon, grapefruit and tangerine clash. This then builds and peaks with a salty note, creating a very gose-like experience. Following this, the soft wheat malts come crashing through, cleansing the palate prior to the next sip! With an IBU of 10, this one has little-to-no bitterness.

Next up after Zephyr is ‘Jet Trash’. I had high hopes with this, having sampled lots of great New England, East and West Coast IPAs. I took another glass and looked closely at this can. It was coloured a deep green, closely resembling the colours of other great IPAs, namely ‘Jack Hammer’, which I am a huge fan of. Not only is this can colour similar, these sister beers share a variety of hops such as Citra and Simcoe, so I was sure that this was going to be great. This beer poured a darker golden, amber colour from the can. A less impressive white foam head was formed, though it persisted for a bit longer, leaving lacing on the glass whilst you drink it. Citrus aromas again came from the beer, hardly surprising given the hops used. On sampling I’m taken to beer heaven again – twice in one sitting, brilliant! The beer starts off with the citrus aromas, but these change to bright zingy flavours on your palate. The amber nectar then develops into a sweet fresh pine taste, before turning into big resin flavours. The resin gives a great bitterness and if this is what you strive for in a beer then you need to get your hands on this. A gentle warmth, reminding you that this beer nearly hits 7% ABV, washes through at the end.

‘Jet Trash’ reminds me of ‘Sixpoint Resin’, which again has those hard-hitting resin notes. It is also similar to ‘Gandolf’, one of the draught beers that I frequently enjoy from The Sub. 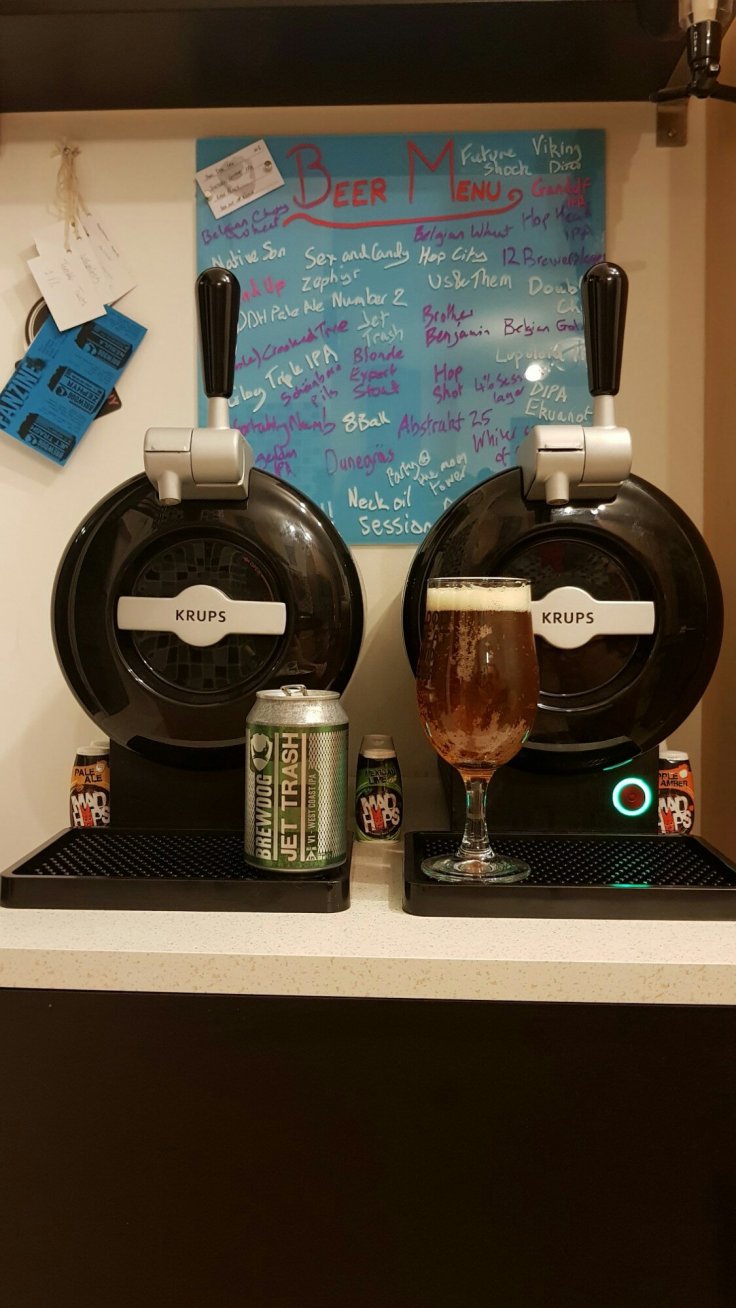 Rating: 4.0/5. ‘Jet Trash’ was another winner. I’m in utter joy – two standout cans that I would be happy to fill a growler with. That’s the true sign of a good beer to me.

As many of you may know, stouts aren’t my typical beer. All you need to do is look at my reviewed beer list, which is stacked heavily in favour of IPAs and pale ales. Nonetheless, it was time to give this beer a chance. Due to my hesitance regarding sampling this stout (well more my eagerness of the other two beers!) it was my last of the three beers within my first Fanzine box.

If nothing else, the purple design on the can looked gorgeous. I whipped the top open and poured the beer into a 2/3 sized pint glass (which happily is the right size for a 330ml can!). Firstly, I couldn’t believe how dark this beer was. It also appeared to have quite a thick consistency upon pouring this jet-black liquid. On top of this beer was a medium deep brown head, which settled over the space of a minute, leaving hardly any trace on the glass. Okay, procrastination aside, it was time to finally sample the beer. It smelt bittersweet – like dark chocolate. On drinking it was velvety smooth, far silkier than an IPA. Not only this, but it had a surprising sweetness to it – chocolate galore and very syrupy. Alongside this came an aftertaste of bitterness and a touch of coffee (which usually is not to my taste). Whilst drinking, the strength really came through, which made me have to take my time whilst sampling. I could only drink it sips at a time, though by the time I reached halfway, I was really starting to enjoy each mouthful! This is a very big beer. 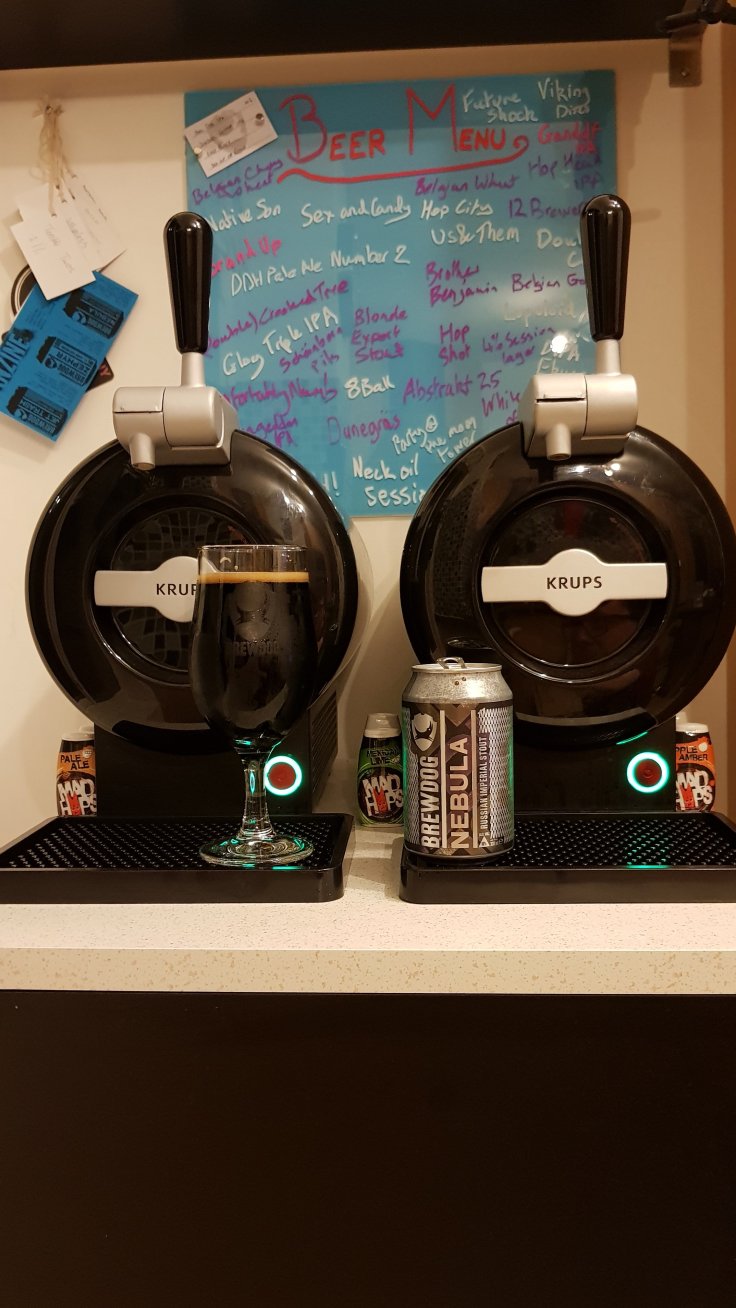 Rating: 2.75/5. ‘Nebula’ has space connotations and I could imagine a stout-lover saying “this is out of this world”. I don’t think that this is the case for me, but personally it has CHANGED my world, in terms of the way I look at stouts – and I would have to say, that’s even more impressive

Overall, issue one of Fanzine has been a success. A feature that I really like about this subscription is the fact that “old hits” that are no longer in production will be limited showcases again, new experimental beers will be tried and tested, and polls will be undertaken to determine if some of these beers should be continued as regulars on BrewDog’s menu. Consider it like a year-round prototype challenge! Not only this, but the beers are also readily available at time of release in your local BrewDog venue. This means:

If you want to join the Fanzine experience AND want a £10 voucher for the BrewDog website? The sign up via the link below, select referred by a friend and use “Dr Beer” in the referral section! The associated email is: thebeerbloguk@mail.com

PS: already looking forward to the next delivery

Also, if you want to become an Equity for Punk, (like me!) which comes with a variety of benefits then use my referral code. Note, equity at risk, and invest following your own reading.

3 thoughts on “Fanzine, The Big Beginning”