A: I graduated from Heriot Watt University’s brewing course in 1998, so I’ve just celebrated my 20th anniversary as a brewer and the brewery isn’t far off the same landmark. Fyne Ales has been going since 2001, our first brew was on St Andrew’s Day of that year.

A: I grew up in Fraserburgh, way up in Aberdeenshire and when it came to choosing where to go to University, I was very keen to move to somewhere with a bit more going on and Edinburgh seemed like a good idea. I was looking at chemistry courses and something appealed to me about brewing and the way it applies a practical approach to chemistry, and with the course at Heriot Watt available in Edinburgh, it seemed like a good idea!

Q: When you’re not brewing what are your hobbies?

A: I’ve been a keen fencer since my teenage years, and competed in the Scottish national team up until the age of twenty. I’ve kept it up since and still practice weekly, though I’m not quite to the same level as I was back then! I used to play rugby and still enjoy a game of football with some of the lads from the brewery and friends, but I probably shouldn’t have mentioned that given my skill level, or lack of.

A: I’m a believer that there’s a time and a place for every style of beer, but when it comes down to it, I’m a dark beer man – always have been. As a brewer, I enjoy the subtlety of flavour that can be achieved by using complex malt bills – using hops to get big fruit flavours into beers isn’t a massive challenge, but getting a balanced, satisfying body with layers of flavour in a stout or porter takes a bit more consideration.

Q: If you could only have one of your brews for the rest of your life, what would it be and why? (I know it’s like picking a favourite child!)

A: Well, that’s definitely tricky, but I think Vital Spark edges it for me. As I mentioned, I like dark beers and I think Vital Spark has a beautiful balance of rich maltiness and fruity flavours from Cascade and Amarillo hops. It might not be perfect for a hot, sunny days, but we don’t get that many of them up in Argyll, so I think I could cope.

Q: You are in a supermarket, in the Beer aisle of course, what would you buy? (your wonderful beer isn’t on sale unfortunately!)

A: This question has gotten much harder now there’s a much better selection in supermarkets! I’d probably have a look and see what Belgian or German classics they’ve got, and in terms of British breweries, think there’s a few whose beers I’d go for because I know I’m guaranteed a good beer. Thornbridge are delivering consistent quality, for sure, Harbour and Fourpure’s fresh cans have been tasting great and I saw Six Degrees North’s Peleton bottles in a supermarket recently, which for me is probably the best lager being produced in Scotland at the moment.

A: With our Origins Brewing project, we’ve been looking for ways of capturing a sense of place in the beers we’re brewing – using local and native microflora for fermentation and lots of foraged ingredients from around the farm estate. I’m keen to do more and more of that, because some of the wild produce you can find in the Scottish hills and on the shores of the Loch can offer really unusual flavours that, with a bit of time and knowledge (and maybe a bit of blending) can produce truly unique beers that tell the story of where we are from as a brewery.

We’ve also just brewed a new beer, Trial 212, using an experimental British hop – CF212 from Charles Faram. Those guys are working really hard to create new, UK-grown hops with super-interesting flavour profiles, so whenever we can get our hands on them, we want to brew with them and see how they work in different beer styles.

A: We do a lot of collabs at Fyne Ales – lots of brewers want to come and visit our scenic corner of Scotland, so I’ve had a chance to work with some really talented brewers on some weird and wonderful beers of the past few years. We’ve got our first transatlantic collab coming up with Cigar City next month, which I’m very excited about – Wayne has an amazing brain for beer and we’re doing two brews (one in each of our breweries) on the same day, which will be awesome. Maybe it will lead to more collaborations with our friends in the U.S, I hope it does – the beer scene out there is so big and moves so fast, there’s lots we can learn by visiting them or hosting them in Glen Fyne.

Thanks for taking part Fyne Ales, really looking forward to seeing that collaboration with Cigar City! 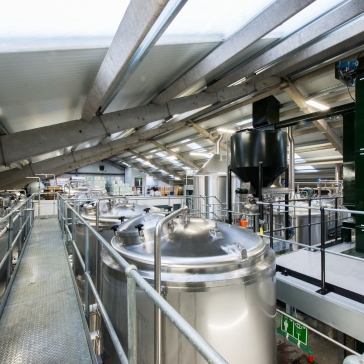 One thought on “Fyne Ales”