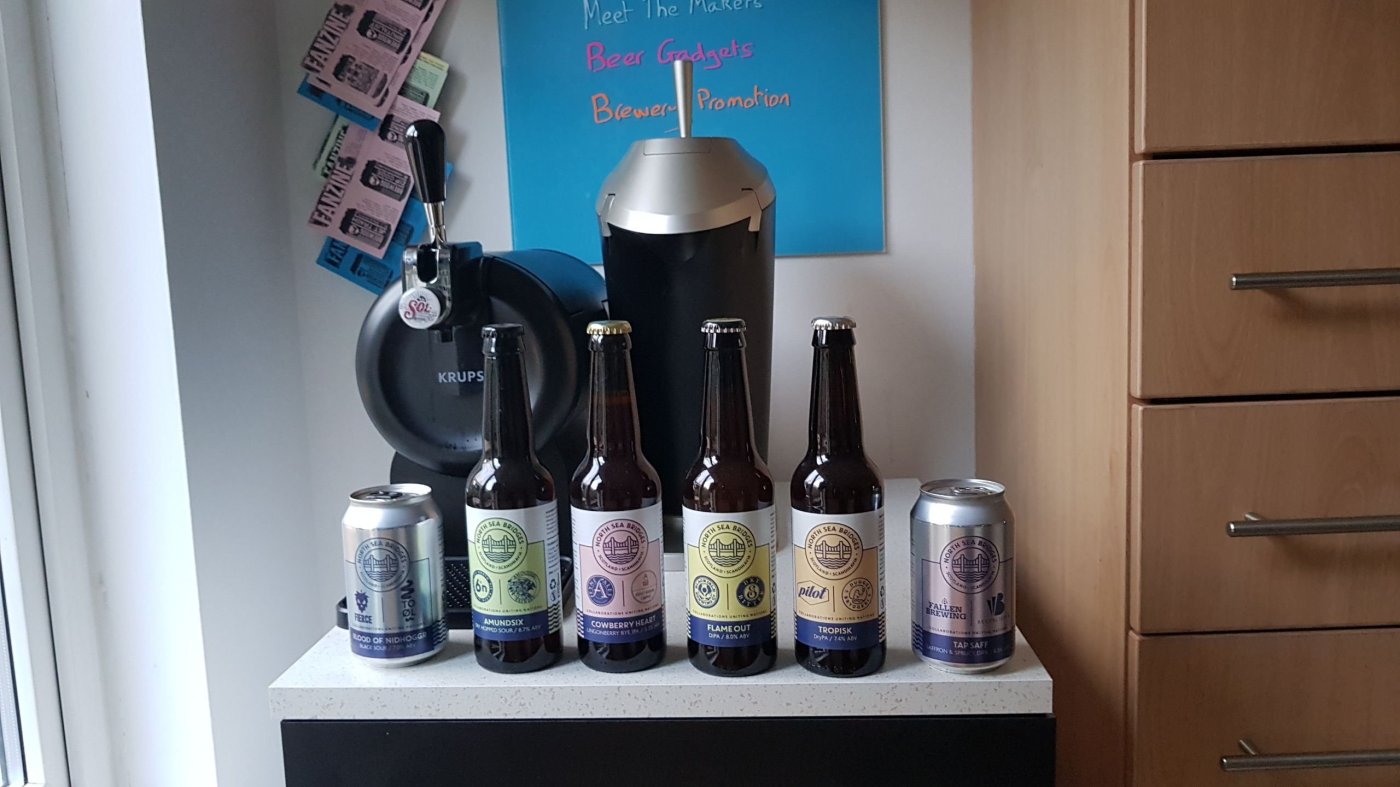 At a time of Brexit-associated issues such as finite medical supplies, miles of lorry tailbacks at key international trading ports and governmental uncertainty, at least I can turn to a nice beer to temporarily forget about these woes. Despite the ambiguity of Brexit, some of my favourite Scottish breweries have created collaborations with their Scandinavian beer cousins (from which we are separated by the North Sea). Yes, at a time where most European relationships are tense to say the least, 12 breweries have worked together to create a special box of beer. For this selection, 6 beers were brewed in Scotland; whilst next year, the beers will be brewed at Scandinavian bases. These beers were purchased from Grunting Growler in Glasgow.

My only experience of lingonberries has been courtesy of the flat-pack giant IKEA: they typically serve a lingonberry condiment with their meatballs. The beer had a sharp, deep-red base, characteristic of the lingonberry. There was a slight tan-foam head, just a few rows of bubbles tall, which disappeared prior to sampling. There wasn’t a huge amount of aroma on the nose, but what I could smell was a slight tartness, which I would expect from these Artic berries. The beer had a light texture with minimal carbonation. Initially a sharp sourness from the berries came through. In spite of this, the berries also brought a sweetness. There was rye within the beer too, but it took more of a backseat to the strong fruit. The beer rounded-off with a juicy, gentle, slightly bitter finish.

Diagnosis: 3.75/5. “Cowberry Heart” not only features the special berry, but truly allows it to dominate. It’s a complex beer yet remains balanced. For those that want to enter into sours, I’d recommend starting with something like this.

This was the only one of the series in which I had previously sampled a beer from the Scandinavian brewery, but not the Scottish contributor. An orange-gold hazy liquid came from the bottle: it formed a soft white foam head and the tropical aromas were easily identifiable from a distance, though on closer inspection I detected citrus scents too. The beer was full-bodied with moderate carbonation, which developed into a wonderfully juicy, thick and creamy mixture of orange, grapefruit and mango. There was a warming boozy sensation near the end of the beer, with a mild bitterness, though I perceived less than the theoretical IBU of 45 that was listed. It had a dry, clean finish, cleansing the mouth for the next sip.

Diagnosis: 4.5/5. “Flame Out” … Flame out? No thanks! Replace the Olympic torch with it – I don’t want this beer to disappear!

For those of you that are unfamiliar with Norse mythology, “Nidhoggr” is a dragon-serpent who gnaws at the roots of the world tree, Yggdrasil. So effectively, I was drinking the blood of a Nordic mythical creature – kind of gross, but weirdly awesome! Black in colour, its mocha foam head dissipated within the first couple of minutes. It produced a surprisingly tart aroma, like a sour berry note with a roasted darkness. Tasting was incredibly complex: a dark chocolate-coffee bitterness with a deep woodiness initiated this full-bodied beer. It was silky and had minimal carbonation. Following the first flavours, a rich and fruity juiciness developed; this was sweet, but simultaneously had a tongue-twisting sourness to it too. The final notes accentuated a gullet-warming boozy sensation. It was neither overly sour, nor bitter and did exactly what this collaboration tried to achieve: “…complex, unusual and unique”.

Diagnosis: 4.0/5. “Blood of Nidhoggr” is proof that the breweries can complete their objectives. They certainly satisfied my taste buds! I’m not surprised – I’ve sampled from both of these incredible beer producers previously and my expectations have always been met! This is definitely a duo to keep an eye out for.

Another pairing from which I have sampled from both contributing breweries. I loved the play on the name. “Taps aff” is a colloquial term used in Scotland, as whenever there is a glimmer of sunshine, members of the public have an incredible urge to take their tops off, even if it would be considered too cold to do so anywhere else. Of course, the beer’s name had been edited to reflect the addition of saffron. The beer poured a beautiful orange-golden colour, with a huge haziness looking like a scorching sun – or more appropriately in this case, saffron! On top sat a proud, long-lasting foam head, like a cloud that the sun’s rays hadn’t managed to burn through. The beer gave off a rich aroma of tropical fruits mingled with herbaceous notes. Sampling was a joyful experience: it began with creaminess, gave way to flavours of deep orange, grapefruit and pine, before finishing with the warmth that can only be offered by bitter alcohol. I started to feel that the beer was losing texture: it became quite thin, with little carbonation. Despite this, a little bit of spice built, which was comforting and fused with the bittersweet notes already on the palate.

Diagnosis: 4.0/5. “Tap Saff” is bitter, creamy, spicy and sweet. One can’t ask for much more. The only thing I’d change? I’d add greater body to the beer: the taste is there, but the texture misses the mark slightly.

The name for this beer was a mash-up of the breweries involved in this collaboration – the second of the sours within this series. Into my Grunting Growler glass poured a bright, transparent golden colour, with no defining foam head. The beer gave off a dominant sour scent, but produced pleasant fruity tones too, with lime notes particularly noticeable. On sampling, there was a sharp lime and grapefruit zing, which was powerful enough to awaken any dormant taste buds. From this dominating start, flavours faded into a hoppy and dry finish, which cleansed the palate.

Diagnosis: 3.25/5. “Amundsix” would be a great choice of brew on a warm summer’s day. Sour initially, but light and refreshing with a great citrus kick.

Last but not least, a murky light caramel was poured from the final bottle, with a moderate off-white head settled on top. The saison yeast was immediately identified by my olfactory senses from a distance and I began to get a bit worried as the characteristically funky smell of a saison came from the beer. Sampling gave a similar experience: all I tasted was the funk, the distinguishing yeast, and nothing else. Grapefruit was listed on the bottle, but despite searching for it, I couldn’t find it.

Diagnosis: 1.25/5. “Tropisk” is produced by two breweries I admire, but this just doesn’t do it for me.

Unfortunately, it wasn’t a successful ending, but otherwise I was really impressed by this box. I’m glad I waited a couple of months before sampling – it means I needn’t wait as long for the reunion based on Scandinavian soil!