Q: Why the name Wizard Works Brewing Company and where are you based?

A: Wizard Works Brewing Company is located in the heart of the Historic Third Ward in downtown Milwaukee, Wisconsin.

Why Wizard Works?  I’m a wizard.  I’ve been performing magic for almost 40 years and still travel the country doing shows.  I’m combining my love of magic with my love of craft beer and brewing.

A: I’ve been home brewing for about 35 years.  The brewery opens in the beginning of April 2020 and we will start production in about a month.

A:  I was in college and heard you could make beer better than what you could buy (which was Coors in Colorado) so I just went to the only homebrewing store in Denver and asked to get started.  I bought Papazian’s Complete Joy of Homebrewing read it cover to cover several times. I then proceeded to make EVERY mistake a homebrewer can.  I was TERRIBLE at it.  For the first 2 years I didn’t brew anything that today I’d consider even remotely drinkable.  Of course, I drank it all.  I was proud to be drinking my own beer!  One of the sadder days in my life was when I dumped a batch because I realized it wasn’t good.

Then I got better.

About that time the owner of that homebrew shop opened a brewpub in Denver.  It was the first one in the city, and I’d never heard of them before.  I went, and it was amazing, beautiful, and I instantly knew I wanted to do this.  I had a good job as a Soviet Military Threat Analyst working in a think tank, and I didn’t have the money to start a project like that.  But I told myself that by the age of 25 I’d be doing beer.  When I turned 25 I said by the age of 30 I’d have my own place.  At 30 I promised myself that for my 35th birthday I’d open a brewpub.  This went on.

When I turned 55 a couple of years ago I realized I didn’t have that many 5 year chunks of life left to me, and I needed to get serious if I really wanted to do this.  So my wife and I signed up for a brewery incubator program here in Milwaukee, learned a lot of business, marketing, insurance, and lots of other “last mile” aspects of opening a brewery and started looking for a location.  A year and half later it’s finally happening.

Q: When you’re not brewing what are your hobbies?

A:  Obviously magic and magic performance.  I still live and breathe it.  I’m also a banjo player.  Yeah, I’m quite popular with the geek crowd.

A:  Hands down an English Bitter.  Session those puppies!

Q: If you could only have one of your brews for the rest of your life, what would it be and why? (I know it’s like picking a favourite child!)

A:  Right now it’s the Wizard’s Wrath Strong Ale.  It’s medium bodied, big malt forward, lots of Chinook hops to stop it from being sweet, and just a touch of caramel flavour. 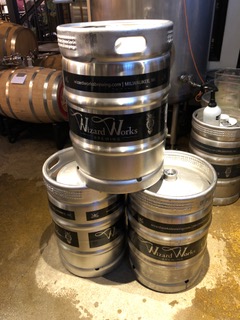 Q: You are in a supermarket, or bottle shop, in the beer section, what would you buy? (your wonderful beer isn’t on sale unfortunately!)

A:  That’s tough.  It depends on how I’m feeling that day.  I look to see if I can find someone attempting an English Bitter.  I love IPAs.  If St. Andrews Oatmeal Stout is available I’ll buy every bottle on the shelf.  Stone’s Arrogant Bastard is always a keeper.  And Sierra Nevada Pale Ale is my go-to.

A: My wife (who brews with me) would love to do a Mexican Hot Chocolate Stout – a solid, creamy stout done with chocolate nibs and a chili pepper combination to give it the right amount of heat and spark.

Q: What brewery would you like to collaborate with and why?

A:  Sam Smith’s Old Brewery in Tadcaster, Yorkshire.  EVERYTHING they touch turns to gold and I want to be part of that

Q: How can we help Wizard Work Brewing Company get started?

Right now the Kickstarter is a big thing.  There are LOTS of expenses when opening a brewery.  More than you can ever think of, and everything costs more than you expect.  The Kickstarter is directed at decorating the tap room and buying signage.  The brewery is there and ready to go.  We need help making it a great place to hang out in and enjoy the beer.  It’s extremely important and the Kickstarter is our way to make that happen.

One aspect of the taproom is we’ll have close up magic for the patrons from behind the bar.  This style of magic is highly interactive, fast paced, funny, and the audience is always a part of the performance.  It’s a constantly running comedy magic show on regular evenings of the week.

BTW, as a side note…  That gentleman who taught me to brew and then opened the brewpub was so successful he ran for mayor of Denver.  After serving as mayor he ran for governor of Colorado.  And after doing that he briefly ran for president of the United States.  A homebrewer accomplished all that.  Cool.

Thanks for taking part, for more inforamtion on Wizard Works Brewing, see the following; 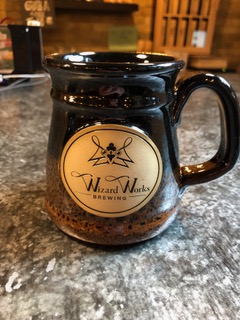